Piano fans looking for something more accessible than the work of George Winston yet with more depth than many adult contemporary performers will find a lot to enjoy on this CD. The album’s friendliness will charm all but the hardest of hearts and put a smile on many faces, too, I’ll bet.” (Bill Binkelman – Wind & Wire) 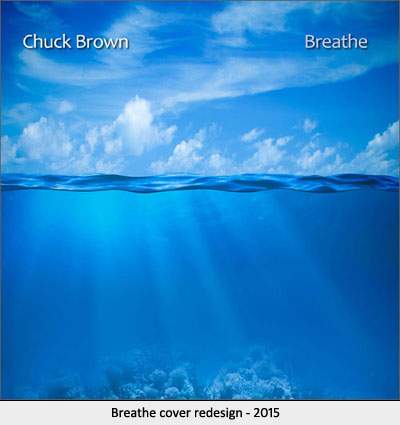 “One of my favorite things about this blog is reviewing music. And when I find an artist, or a particular piece of music that touches me deeply, I feel so privileged to share it with you. I found that today in a piano player named Chuck Brown, and in particular a piece of music he calls, “Remind Me To Breathe.”

“Remind Me To Breathe,” is the piece of music that caught me. Not grabbed me. That wouldn’t be a right turn of phrase. It caught me like a cradle of tree branches in a gentle breeze. The music told me everything was safe. The world was safe. His soul was safe. But I had to remember to breathe.

That took my breath away because I lost my husband four years ago and I remember, and still do, find myself holding my breath, both physically and emotionally, at the devastating pain of his death. This song spoke to me and told me that I could, and should, remember to breathe. Life is precious and eternal. And that all of life and the understanding of it, was so much bigger than any or all of us.”

“With so much piano music around, can anyone truly be considered a pioneer? Sure, especially when it comes to making therapeutic music that is also incredibly beautiful and spiritually uplifting. Noting that the earliest recorded use of sound healing was when David, the young shepherd boy, eased the ailments of the king of Israel with his harp in 1000 BC, Brown explains that his restorative music isn’t to be played in public like commercial piano music, but should be enjoyed as “a time apart from the weirdness of the world.” This refreshing panacea begins with the cheery “Give Us a Smile, Alicia” and continues into one of the most lovely instrumentals recorded in recent memory, “Remind Me to Breathe.” Tastefully accented with cello, this gorgeous tune is more effective than aspirin on headache when programmed for repeated play. Blue hearts will be perked up by the graceful “Waltz Flowers,” and angry hearts soothed when they realize “Some Things are Better Left Unsaid.” In fact, there’s a piano tune here for most common emotional ailments. What could be better? INSTRUMENTATION: piano, electric piano, acoustic guitars, bass, percussion, cello.”
PJ Birosik
The Monthly Aspectarian

“Close your eyes and imagine the most beautiful dream….this album titled “Breathe” is the soundtrack to the fantasy world of pure peace and relaxation. Chuck Brown and company have created a luxurious album of instrumental heaven. Composition is done with excellence throughout the album, whether it be solely a piano-based song or one with acoustic guitar and other sounds thrown in. And each track does have a theme according to its title; a few that grabbed me were ‘she’s grown up sad’ with it’s acoustic intro, ‘the world’s biggest fool,’ and album opener ‘give us a smile, alicia.’ Beautifully done, I actually heard the song telling me a story. Each piece created here has a unique quality to it, and each are centered on the usage of imagination.”
Daina Kazmaier
Music Dish 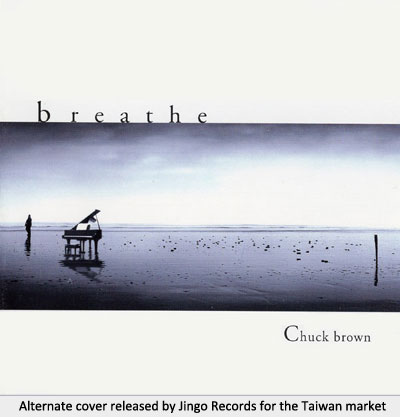 “Pianist Chuck Brown brings a breezy comfortable feeling to his latest recording, Breathe. Warm, accessible, and low-key (even when the tempo is moderate or fast), the seventeen (!) songs on this album roll forth from the speakers with true good nature. From a compositional standpoint, songs such as the album opener, the cheery, “give us a smile, alicia” the reflective “some things are better left unsaid” and the light-hearted “plays well with others” (don’t you love those titles? I do!) straddle the pop, jazz, and adult contemporary genres. In fact, you could say Chuck takes the best parts of all those genres and mixes them together to make music that is easy to listen to either directly or while played in the background. Since the album has seventeen songs on it, you’d be correct if you assumed some of the cuts are short in length. But these are not cookie-cutter tunes. The tone and feeling of the songs vary considerably. “Lights across the water” is a Winston-ish tone poem, while the next song, “the world’s biggest fool” could be from a Lanz or Gratz album. However, even noting these similarities (which I mention purely for the sake of comparison), Chuck is an original. His playing talent on the keys is solid and he shows a particularly sharp sense of timing and rhythm. He knows when to let a phrase linger and when to push the tempo forward. Joining Chuck on some cuts are album producer and arranger Michael Alexander Jackson (acoustic guitars, bass, percussion and synths), Phil Maneri (fretless bass) and Dan Clark (cello). However, the latter two only guest on one song each and even Jackson’s presence is subdued. This is mostly a solo piano album with just enough added musical textures to spice it up a bit. Breathe is a rock-solid collection of piano instrumentals that makes for a most enjoyable listening experience. After the first two spins, I no longer noticed the brevity of some of the songs, as the album started to play more as a cohesive whole instead (even with the wide variety of tempos and moods).
Piano fans looking for something more accessible than the work of George Winston yet with more depth than many adult contemporary performers will find a lot to enjoy on this CD. The album’s friendliness will charm all but the hardest of hearts and put a smile on many faces, too, I’ll bet.”
Bill Binkelman
Wind & Wire

“There are times when simplicity works the best, and this album is a case in point. Chuck Brown is a pianist and Breathe is a collection of gentle and relaxing instrumentals. The album begins with the achingly beautiful Give Us A Smile, Alicia, followed by Remind Us To Breathe, another lovely tune backed by cello. Indeed, there is a restrained backing by a small number of musicians on many of the tracks, but it is sometimes so restrained in the mix at times that it sounds ghostly.
I’m at a loss as to how to categorise the music on this album – I’m sure many would classify it as ‘New Age’ or even [God Forbid!] ‘Easy Listening’! But both categories have become the catch-alls for the most horrible and insidious blandness in recent years, and this music is certainly not bland. Perhaps ‘Contemporary Instrumental’ will do… Either way, this album is designed to relaxe you and reduce those urban stress levels. One of the other nice touches is that the album is dedicated to the very ill Dudley Moore, which is a moving gesture from one musician to another – check out You Never Know, for this musical tribute.”
John Peters
The Borderland

“Breathe” is an all piano album with the addition of guitar, percussion, and cello that will relax you and take your soul to great places. Soothing in it’s touch these highly personal tributes to the beauty in our lives leaves you feeling whole and refreshed to take on the world. His dedications include “Give Us A Smile, Alicia” for a young child and “You Never Know” for the gifted pianist with PSP, Dudley Moore. This is music of an inspiring nature which takes it’s listener to places Chuck Brown creates with his heart. Places I would love to go…..places very special indeed.”
Carole Galvan
ToTheBone.com
Smooth, romantic and tender solo piano compositions are offered in this intimate release by composer/pianist Chuck Brown. Additional instrumentation (on certain tracks) includes guitar, bass, cello, percussion and synth, but always in the foreground are Chuck’s sweet piano melodies, leading the way. Deliciously relaxing, this music is perfect for a quiet candlelight dinner with your beloved, as background to a soothing massage, or simply for unwinding after a busy day.
Rev. Robert Walmsley
Musical Soundscapes

Like breathing, once it’s going on for a while, you forget the cd’s on. It becomes 2nd nature to the point of relaxation. If you begin to breathe heavily, you worry about your breathing, you know it’s there. But Chuck’s music heals like vitamin E on a forgotten cut. 17 songs and 52 minutes long, and very smooth, mostly solo piano music. ‘To the Listener: One of the earliest therapeutic uses of gentle instrumental music was when the young shepherd boy, David, came and eased the ailments of the king of Israel with his harp (circa 1000 BC). It’s the same for me. Instrumental music is so often a refreshing touch… a time apart from the weirdness of the world.” That’s what this is. Call it new age if you like, but it’s good stuff, well realized, with the odd guitar or percussion thrown in now and then to lend variety. I’ll be writing books to this stuff. Thanks.
Ben Ohmart
@N-Zone Magazine

“Friendly piano man Brown hits a nice laid back adult groove on his new, mostly solo, piano set. Nice in the background or foreground, this is sweet takes on sketches and themes that say it precisely and move on, no noodling. A nice find for adult listeners on the prowl.”
Chris Spector – Midwest Record Recap

“Counting over 125 life-time compositions as keepers, the one’s he’ll admit to writing, 17 of them appear on his 2000 mostly solo piano release, Breathe. Chuck Brown’s piano compositions are sweet. Along with a clear pop sensibility the arrangements are open and uncluttered. Each seems to be filled with enough air so as to allow your soul room to get up and walk around–gazing here and there at will with gratified knowing smiles. Breathe intersperses pure solo piano with lovely ensemble pieces, including acoustic guitar, electric piano, fretless bass, cello and subtle percussion. While writing music and working as a voice talent for radio and TV in Columbus, Ohio Brown also endeavors on a weekly basis with elementary school age kids in a teaching and mentoring capacity. Due out soon is Brown’s first release for kids with his band The Chuckleberries, aimed toward grades K-4. We’re all looking forward to this release which will showcase Brown’s unique energy and musical sensibilities.”
Greg Ozimek – Music Reviews & More!

“A relative newcomer to local music, Chuck Brown’s most recent disc is a collection of 17 piano pieces, with and without accompaniment. Much of Breathe could pass as less-ethereal fare on public radio’s syndicated Echoes show. Unobtrusive additions of percussion, cello, guitar and synthesizers adorn the expressively organic, loosely composed original songs. Brown’s biggest accomplishment, though, is integrating different styles and forms into his tunes. He creates a waltz without calling up cheesy cliches on Waltz Flowers, and keeps his new age songs like Remind Me to Breathe grounded in reality with a strong acoustic sounds. Also noticeable in Breathe are hints of jazz and classical. Though quietly unassuming, Breathe has earned Chuck Brown some attention of late, most noticeably by ColumbusMusic.com, which chose to include the album’s slightly Mediterranean-flavored Return to Pamplona on its Super Sampler Vol. I.”
Adam Garratt
Columbus Alive